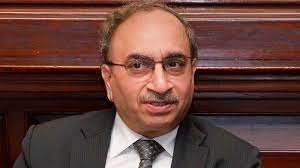 India won’t be as hard-hit by the global crisis as other nations, according to the SBI Chairman

Dinesh Khara, the chairman of the State Bank of India (SBI), stated on Friday that India probably won’t experience a global recession as severely as other nations. He claimed that with a predicted growth rate of 6.8%, India is doing well.

Khara stated, With a predicted growth rate of 6.8% and inflation considerably under control, India is doing quite well, in an interview with PTI on the sidelines of the annual the World Bank and the International Monetary Fund will meet here.

Because a sizable portion of the GDP is primarily devoted to the domestic economy, (India) has a predominantly inward-looking economy in terms of demand. From that perspective, I believe the global recession will have an effect, but it won’t be as noticeable as it may be on other economies that are globalized He spoke to PTI.

When compared to some of the other major economies that have a sizable export component, the Indian economy’s beta factor may be far smaller, he continued.

According to him, supply-side inflation rather than demand-led inflation is the main driver of inflation.

When we examine the supply-side causes of inflation, we find that capacity is only being used to the tune of 71 percent. There is an opportunity for improvement in the capabilities in that respect. In other words, one of the contributing (factors) is the disruption of the supply chain, which has occurred as a result of the global headwinds, and their effect on oil prices He spoke to PTI.

According to Khara, all economies are currently in a difficult period, and the administration is focusing on addressing these issues. It is believed that India’s economic prospects will improve in the future, he said.

Sanjeev Sanyal, a member of the Economic Advisory Council to the Prime Minister (EAC-PM), predicted on October 9 of this year that, despite concerns about a global recession, India may end up being the strongest major economy with 7% growth.

The EAC-PM member noted that India can grow at 9% in a favorable external environment, similar to the early 2000s when the world economy was expanding. However, the World Bank had previously predicted a 6.5% growth rate for the Indian economy for 2022–2023—a reduction of 1% from its June 2022 projections—citing a worsening global economic climate.

The Reserve Bank of India has reduced its growth forecast for the current fiscal year from 7.2% to 7%, citing aggressive tightening of monetary policy worldwide and a decrease in demand.

2022-10-15
Previous Post: How did Mohammed Shami perform before the T20 World Cup? R. Sharma Responds
Next Post: Aruna Irani: Due to rumors of my marriage to Mehmood, no producer was willing to collaborate with me