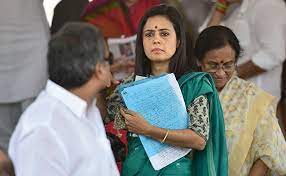 Mahua Moitra, a member of the TMC, is one of many petitioners who have criticized the Gujarat government’s choice to pardon the 11 defendants in the Bilkis Bano case in the Supreme Court.

Mahua Moitra, a member of the Trinamool Congress (TMC), criticized the Bharatiya Janata Party (BJP) on Saturday after the saffron party nominated a Godhra MLA who advocated the release of Bilkis Bano convicts and referred to them as “Brahmins with sanskar” for the next assembly elections.

The rapists and murders in the Bilkis case were referred to as “Sanskari Brahmins” by Godhra MLA, who was renominated by the BJP. This is the Gujarat Model. Murder & Hate She tweeted, “Fete & Reward shall follow.”

Moitra is one of the petitioners who have asked the Supreme Court to reverse its decision to free the 11 rapists in the Bilkis Bano case. The matter’s subsequent hearing is slated for November 29.

The BJP has renominated the Godhra MLA who referred to the rapists and murderers in the Bilkis case as “Sanskari Brahmins.” The Gujarat Model is this. Kill & Hate. Next, fete and reward.

Days after the men’s release, BJP’s Chandrasinh Raulji made the comments in an interview with news outlet Mojo Story in August. He was a member of the Gujarati government committee that pardoned the 11 criminals.

Raulji was overheard remarking in Hindi that the rapists are “nice people – Brahmins” during the questioning. Brahmins are also renowned for having strong’sanskar’. It might have been someone’s evil desire to corner and punish them,” he said, adding that the prisoners had been well-behaved while housed.

The Telangana Rashtra Samithi (TRS) politician Y Satish Reddy shared the video on Twitter and referred to the BJP as “the lowest a party can ever sink” in response to the BJP MLA’s remarks.

Later, in an affidavit submitted to the Supreme Court, the Gujarat government, which is led by the BJP, defended its choice to pardon the criminals.

Chandrasinh Raulji, a BJP MLA, had served on the Congress’ panel that decided whether to release the prisoners who had served 15 years in prison. He is a six-time member of the legislative assembly from Godhra, the location of the 2002 riots and the kidnapping and murder of nine members of Bilkis Bano’s family, including her three-year-old daughter, by 11 men.

He had defended the release of those guys in an interview with the online news outlet Mojo Story, saying: “Since Brahmins are known for possessing strong sanskar, they were (cultural values). Someone may have wanted to corner them and punish them with bad intentions.” The rapists had served 14 years in prison, according to the statement, and their “behavior was found to be good.”

During the sectarian riots in Gujarat in 2002, Bano—who was five months pregnant—was raped and seven of her family members—including her three-year-old daughter—were slain. The 11 prisoners, who had been serving life sentences in the Godhra Sub-Jail, were freed on August 15.

Before the assembly elections in August 2017, Raulji defected from the Congress party to the BJP. Only 258 votes separated him from his former side as he won the elections on the platform of his new party. Raulji had triumphed on a Congress ticket in the previous elections, which were held in 2007 and 2012.

2022-11-13
Previous Post: Foreign exchange reserves are for rainy days; the RBI did not only buy them to display: SKITIANTA DAS
Next Post: Two weeks of Elon Musk’s erratic Twitter behavior, including “vomiting in trash can and napping in office”