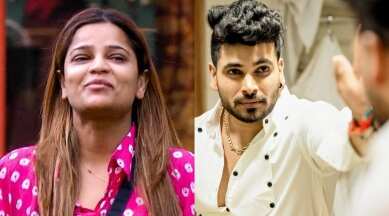 Shiv Thakare and Archana Gautam got into a heated fight, and the former became physically abusive. She was instantly kicked out of the Bigg Boss 16 house.

The Bigg Boss house has a strict no-violence policy that has always been followed. The audience has watched numerous contenders being expelled from the house after getting into fights with other competitors. Bigg Boss is currently furious with Archana Gautam. She engaged in combat with participant Shiv Thakare, leaving the house as a result.

Bigg Boss “nakrewali” for this season, Archana Gautam, is rumoured to have been booted out of the house. She engaged Shiv Thakare in conversation. But as her wrath took over, she hit Shiv Thakre.

An insider with knowledge of the programme claims that Shiv Thakare and Archana Gautam got into a heated altercation during which Shiv made disparaging remarks about Archana. The dispute became even more heated when Archana responded. She was immediately ejected from the residence.

Just a few days previously, Sumbul Touqeer Khan and Archana Gautam got into a fight when the former made fun of the latter for getting close to Shalin Bhanot and disrespecting her father.

Tweeters are not pleased

The Khabri, a Twitter account, tweeted the news that Archana had been let go from the show for behaving aggressively with Shiv. As soon as the news surfaced, Twitter users expressed their anguish and several demanded that the creators bring her back.

Archana has allegedly been “eliminated for becoming violent with Shiv Thakare,” according to many unsubstantiated tweets from the Twitter account The Khabri, which is well-known for relaying insider Bigg Boss information. ‘Shocked’ followers started trending ‘Bring Archana Back’ on Twitter as soon as the news spread.

Here are a few responses:

Gori Nagori, Sumbul Touqeer Khan, and Priyanka Chahar Choudhary were this week’s nominees. It is uncertain whether there will be any other eliminations during the Weekend Ka Vaar after Archana was sent home.