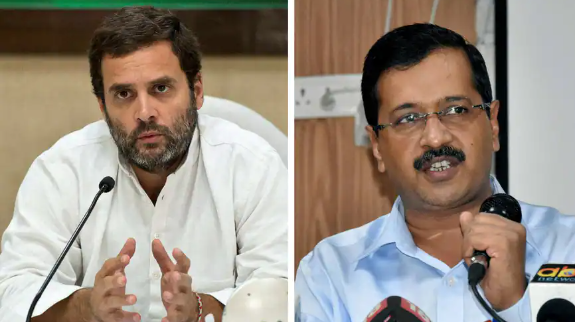 Rahul and Kejriwal Modi Opponents, Hindutva, and UCC Congress is attempting to enhance its ‘product’ in order to make it acceptable, but there is another opponent on the horizon in Arvind Kejriwal… In the run-up to the general elections in 2023, the BJP’s trump cards will be nationalism and Hindutva.

As 2013 began, the over-eight-year-long Manmohan Singh government began to collapse due to a slew of corruption accusations. People were preparing for an alternative in 2014, since there was a sense of political drift.

A decade later, when confronted with a comparable schedule after more than eight years in office, the Narendra Modi government’s fortunes appear to be exactly the contrary. Last year, some 15 months before the Lok Sabha elections, the BJP under Modi won historic victories in Uttar Pradesh and Gujarat. The BJP is banking on Modi’s popularity to win strongly in the nine state elections coming up in 2023. On the surface, the Modi brand looks to be unrivalled.

Rahul Gandhi was the main opponent to PM Modi in the 2019 election, where he ran on the topic of the Rafale’scam,’ but lost. The image attributed to him by a significant number of people — of a ‘Pappu’ or a non-serious politician — appeared to be the most important aspect. Rahul Gandhi resigned as Congress president after failing to face any electoral challenge.

In this backdrop, Rahul’s ‘Bharat Jodo Yatra,’ which will take place between 2022 and early-2023, is reframing him as a “warrior” who is travelling the length of the country to engage with people. Rahul Gandhi has been positioned as the “PM candidate” against Modi by Congress leaders like as Kamal Nath and Bhupesh Baghel.

The Congress is attempting to enhance its ‘product’ in order to make it more acceptable, but there is another opponent on the horizon in Arvind Kejriwal, whose party believes he is a better choice as a ‘PM candidate’. Following its victory in Punjab and debuts in Goa and Gujarat, 2023 is a make-or-break year for AAP’s national ambitions.

This is because the majority of the nine state elections in 2023 will be straight fights between the BJP and the Congress.

While state election results this year may not be a good predictor of what will happen in 2024, the BJP and Congress will consider it as a warm-up for the major fight.

The Congress would enjoy its chances in Karnataka and Madhya Pradesh, where the party established governments in 2018 until its MLAs switched to the BJP and brought down the Congress cabinets. These are also states with a strong Congress organisation and cadre, as well as leaders like as DK Shivakumar and Kamal Nath.

However, the ‘Modi factor’ might still overwhelm everything in the 2024 general elections since people vote differently in state and national elections. For example, the Congress won the three major states of Madhya Pradesh, Rajasthan, and Chhattisgarh in December 2018, but lost 62 of the 65 Lok Sabha seats in these areas just five months later.

2023-01-03
Previous Post: The function of CCI in the policy realm is being scrutinizeds.
Next Post: The government’s note ban proposal has no legal flaws, according to the Supreme Court.