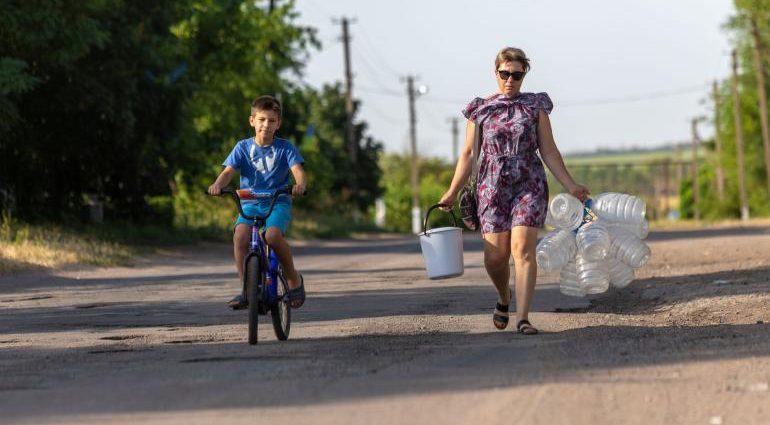 Ukraine is affected by water shortages and missile attacks from Russia

KYIV: Following yet another round of Russian missile attacks on vital infrastructure, Ukraine saw widespread blackouts and water supplies were cut off to significant portions of Kyiv on Monday (Oct 31).

Days after Russia accused Ukraine of conducting drone attacks against its naval fleet in the Black Sea, the Ukrainian army reported that “more than 50” cruise missiles had been fired at various targets across the nation. However, Prime Minister Denys Shmygal said that the barrage had resulted in power outages in “hundreds” of locations throughout seven Ukrainian regions, despite the army’s claims that several missiles were shot down by air defenses.

According to the mayor, the corresponding percentages had decreased to 40% and “270,000” residences later on Monday.

A correspondent from AFP observed more than 100 people waiting to fill empty plastic bottles and other containers with water at a park fountain in the west of Kyiv.

The deputy head of Ukraine’s president, Kyrylo Timoshenko, declared that “Russian terrorists have once more begun a huge attack against energy installations.

According to a separate statement from Kuleba, equipment from 12 different countries would be used to restore Ukraine’s damaged energy infrastructure.

The first batches of relief are already in Ukraine, and the remainder are anticipated soon, he said.

The Russian army acknowledged that cruise missile strikes had been made and claimed that all of the targets had been reached.

A soldier near the target told AFP that three missiles had struck a location to the north of Kiev.

Mila Ryabova, 39, said she was awakened by eight to ten strong explosions in a neighboring town.

The translator Ryabova stated, “We were preparing my daughter for school with my family, but now there is no electricity in our home or at school.

But because of the impending chilly winter, we are fretting and discussing opportunities to relocate abroad. We might not have a heat source or electricity.

A third of Ukraine’s power plants have already been wrecked by earlier strikes this month.

The government of Moldova reported that a Russian missile that Ukrainian air defenses shot down landed on a village in the country’s north but did not result in any injuries.

After meeting with UN Secretary-General Antonio Guterres, President Volodymyr Zelenskyy declared that Ukraine would fulfil its commitment to the grain export agreement, adding, “We’re ready to remain a guarantor of (global) food safety.

Vladimir Putin, the president of Russia, continued to accuse Ukraine of using the grain corridor for the attack, asserting that Kyiv had put civilian ships in danger. He asked Kyiv to make sure “that there would be no harm to the safety of civilian vessels.”

According to a maritime traffic website, at least 10 cargo ships carrying grain and other agricultural supplies departed Ukrainian ports on Monday despite Russia’s decision to halt its involvement.

The rocket, according to the nation’s interior minister, struck the village of Naslavcea near the Ukrainian border.

No civilian cargo ship can ever be used to take hostages or military targets. Amir Abdulla, the UN’s coordinator for the Black Sea Grain Initiative, stated on Twitter that the food must flow.

In Vienna, the UN nuclear watchdog IAEA acknowledged that inspections had started in Ukraine as part of “independent verification” of Russian claims that Kyiv is manufacturing a so-called dirty bomb.

Kiev has responded by asserting that Moscow may employ a dirty bomb of its own in a “false flag” strike.

2022-11-02
Previous Post: WHO says the monkeypox outbreak is still a global health emergency
Next Post: Azeem Mansuri, a 2.5-foot-tall man from the UP, realizes his dream and marries.